Our goal at Taxed in Tempe is to alert readers about the government overreach and irresponsible spending by the Tempe City Council.  However, because of events in recent weeks we feel it is also necessary to inform voters all over Arizona about the real agendas behind certain current Council Members.

It is not news to anyone that many groups have gained national attention by painting all citizens who voted for or currently support President Donald Trump as racists, haters, and Nazis, among other things.  These accusations cannot be supported by facts.  It would be impossible because those doing the accusing do not know every voter personally.  It is easy to paint others with one brush.  Decades ago Reverend Dr. Martin Luther King reminded us not to judge others by the color of their skin but on the content of their character. Ironically, when the “anti-hate” groups were campaigning outside the Phoenix Civic Plaza on August 22nd, King’s niece, Dr. Alveda King, was inside the rally giving an introductory speech for President Trump.

When elected officials call their constituents names, or make general accusations about their constituents who voted for President Trump, it is a slap in the face to those citizens the officials represent.  Whether we agree or not about who is in the White House, Congress, or the Ninth Floor in Phoenix, elected officials are expected to hold themselves to a higher standard, much like a teacher, clergy, or any other community leader.

When it was announced President Trump had scheduled a rally in Phoenix, many of these fringe groups immediately started planning how to exercise their First Amendment Rights. Protests were scheduled, name-calling started, and the news media went into action. Some of the scheduled protests were led by elected officials in hopes of increasing their validity. One of those officials was Tempe Councilman David Schapira.  Never one to miss an opportunity in front of a camera, he decided to organize a peaceful protest. 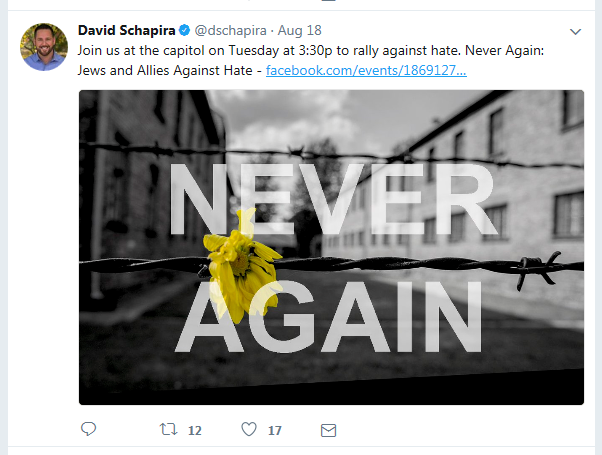 In the days leading up to the the President’s arrival, Phoenix Mayor Greg Stanton and Phoenix Police Chief Jeri Williams assured attendees and those gathering in other locations downtown the area would be secure and folks should enjoy the events while respecting each other’s views.  After the Trump Rally ended, there was some sort of incident outside the Phoenix Convention Center.  Soon there were smoke bombs and an altercation between Phoenix Police and a very small number of protestors.  Unfortunately, Councilman Schapira was in the area. 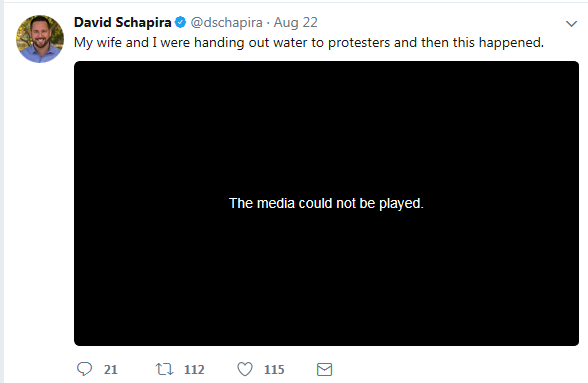 In reality, maybe it was a good thing Councilman Schapira was in the area.  It was another opportunity to get some media attention. 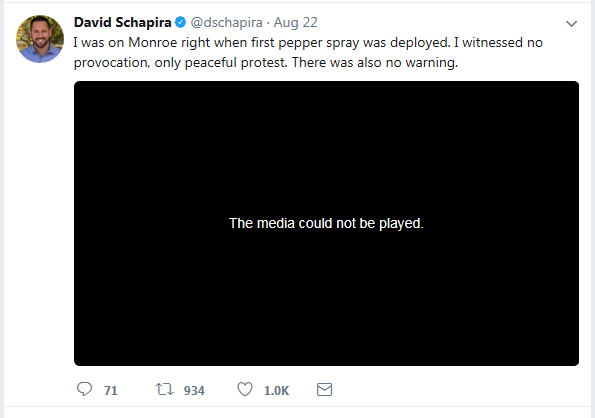 In the heat of the moment, people may tend to jump to conclusions.  Situations can be scary and the media hype of the previous weeks was endless.  It is easy to think the worst.   But as an elected official, one should know to get all the facts before accusing a fellow police department of misconduct.  Unless that elected official has a history of police-bashing.

Obviously Councilman Schapira has never been a police officer.  And he slapped the Tempe Police in the face with this opinion piece from two years ago.  Police have many scenarios to put together in their minds in a split second when called to a scene.  The last thing on their minds is what color or creed the accused is.  While no industry is perfect, criticizing those who put their lives on the line to defend Mr. Schapira and his family is hitting below the belt.

And by the way Councilman, Tempe Police are trained by the Academy and not by Tempe Council–they don’t need help from someone who has not walked in their shoes.  But alas, Mr. Schapira got his name in the Arizona Republic……he must remain relevant because this perpetual candidate will have another election to win someday.  Donations and support from those who live on identity politics are crucial for his electoral success.

During the 24 hours after Mr. Schapira posted the 19 second video, headlines with his name spread on social media.  Just what the doctor ordered for him–after all, he’s running for a higher office so gaining statewide recognition will be imperative.  As the situation from Tuesday night was reviewed, it appears Phoenix Police acted professionally and quickly controlled what could have rapidly become a dangerous situation.  Councilman Schapira had to admit he really didn’t have all the facts when he criticized those in blue.

Since when do police have to issue a warning when they are attempting to control a situation?  The streets aren’t a classroom, Councilman.  There is not time to count to 10 or give three chances before a punishment ensues. And there is not time to determine what the color of the agitator is before either making an arrest or securing the situation.

Some of the public has caught on to Councilman Schapira: 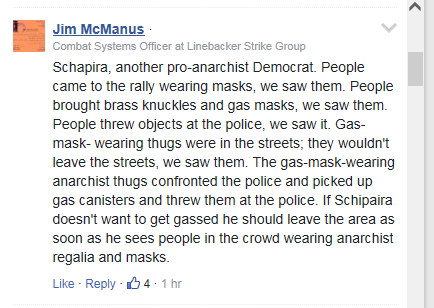 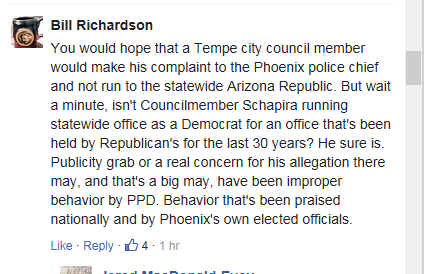 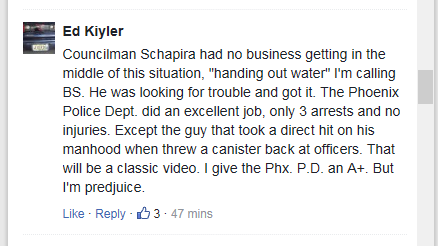 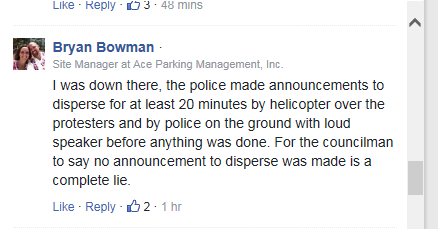 We would say Tuesday’s complaint against Phoenix Police at a highly charged rally featuring President Trump may be just an “oops” by Councilman Schapira.  However, he has a history of getting himself in the middle of conflicts to assure the outcome will benefit him in some way.

When then Tempe Union High School Board Member Schapira was asked to recuse himself from a controversial vote because he had a conflict of interest, he blew off those requests and voted anyway.

More recently, Mr. Schapira was suffering from a bad back.  While healing, he decided to visit the sidelines of an Arizona State University football game. What could go wrong? Sparky the Sun Devil, ASU’s mascot, decided to mess around with his friend and jumped on Mr. Schapira’s back.  Tempeans reading the story immediately knew what would develop.  It didn’t take long before the Councilman sued his alma mater and received $76,000 of taxpayer money. Councilman Schapira chose to hang out with 100 large muscular young men while they were playing ball; now we foot the bill.

This performance is getting old in Tempe.  Next year David Schapira will be stepping down from Tempe Council.  Never fear, he will still create publicity opportunities so he will be around.  We will see if he continues to paint the Arizona electorate as haters vs. non-haters or Nazis vs. Jews Against Hate.  There is no critical thinking when labeling people in this way and we wonder how long this tactic will work.  After all, President Trump has children and grandchildren who are Jewish, so comparing his supporters to Nazis holds no water.   And the final straw for David Schapira’s back is the contributor for this article attended the Phoenix Trump Rally AND has an uncle who was in the Holocaust. Which line do I get in Councilman?