Tempe’s City Council continually forgets why they were elected.  When voters go to the voting booths….oh, wait, no more of that in Tempe.  Let’s start all over.  When Tempe voters fill out their mail-in only ballot, they are hoping to elect individuals who will assure residents are safe, traffic flows, drinking water is clean, and garbage is picked up regularly.  A bonus for voters is to elect Council members who encourage business-friendly policies.

But instead we have the current Tempe City Council which thinks they need to take on every federal issue possible.  The latest is “Trump’s” Border Wall, better known to most in the United States as protecting Americans while they go about their daily business.  This time Tempe Council is using wildlife to hide behind the fact they will oppose any issue with which President Trump won the presidency.  However, the truth is revealed in this “No Border Wall” link within the aforementioned article.

There are a number of oxymorons from the link in the following statement:

Earlier in the article, the author stated the land along the United States-Mexico border is among some of the least populated areas.  Why then does this screenshot state local businesses will be hurt?  How will international relations be impeded?  Is our relationship with Mexico more important than the safety of U.S. citizens and the relationships with Tempe’s neighboring cities?  The author is concerned with endangered species.  Earlier in the piece many of the wildlife listed have wings and will be able to fly back and forth across the border, no passport needed.   Whose civil liberties are violated, those of legal Americans or those who break the law to enter our country?  What is a natural migration of people that is essential to healthy diversity?  Does the author mean migration of people who will vote for a particular set of policies and candidates, legal or not?  Does the United States not currently have a process to enter the country legally? 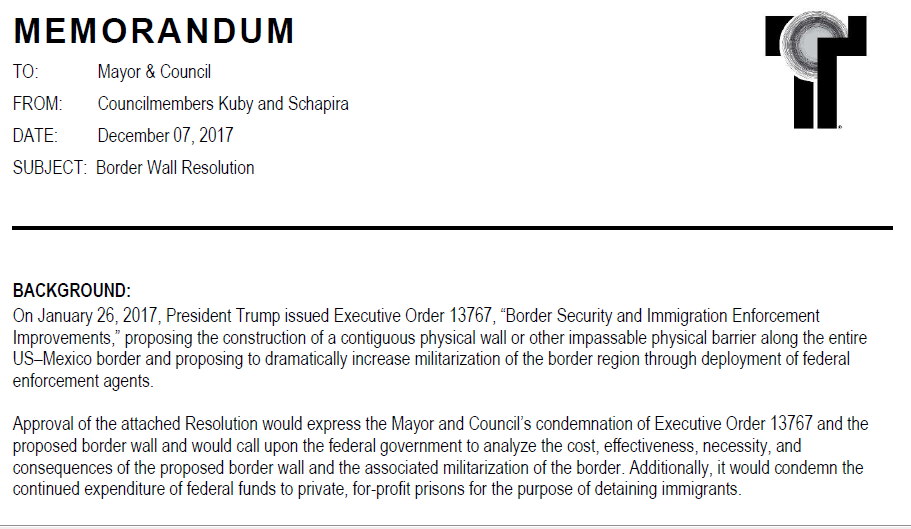 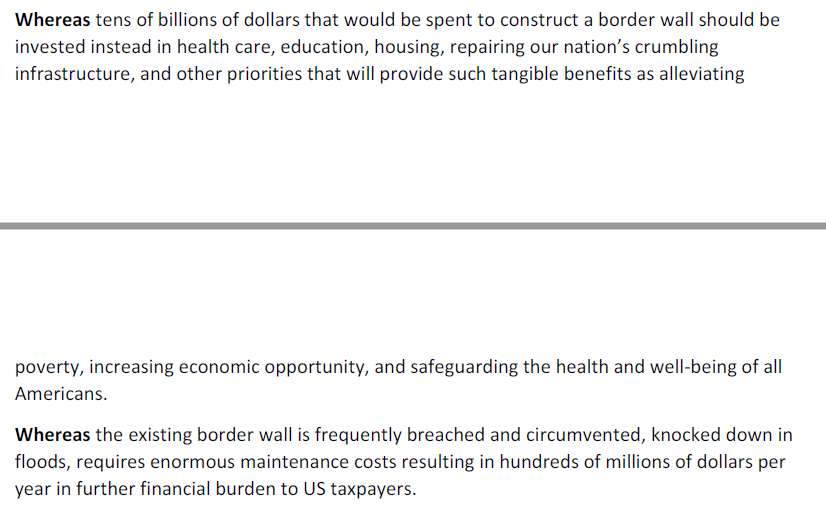 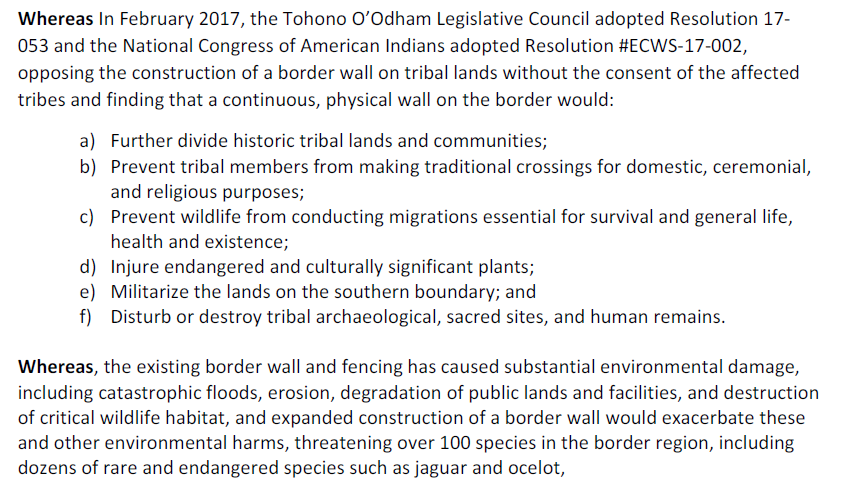 This resolution is scary, but within it there are some amusing statements, especially considering the authors are Lauren Kuby and David Schapira.  Notice the word “illegal” is strategically missing.  There is no need to remind Tempe residents they are excusing lawbreakers. Using the words “tolerance and inclusiveness” appeals to people who want to feel good about themselves, but the authors must have forgotten the United States Constitution already provides for all AMERICANS, regardless of their background.

This resolution was written on December 7, 2017, less than 11 months into President Trump’s administration.  Kuby and Schapira acknowledge the border is more secure.  Thank you, Mr. President.  However, they may want to talk to those with ranches on the border to get a realistic update about whether those property owners feel 100% safe yet.

The dynamic due says they are concerned with the cost burden to taxpayers who will foot the bill for construction.  These are the same two Council members who don’t mind taxing Tempeans to foot the bill for city-run babysitting, harboring homeless, construction of underused bike lanes and a streetcar, and local buses which lose money daily.

Councilmembers Kuby and Schapira are also concerned about religious traditions of the local Indian Tribe.  It’s hard to take them seriously when these same two Council members enthusiastically supported Obamacare which stripped the religious rights of many, especially Catholics, by having to financially support abortion and birth control.  Even The Little Sisters of the Poor, a Catholic religious community, has been in ongoing litigation due to Obamacare.  We will hold out hope the anti-Trumpers, Kuby and Schapira, will issue a resoluton to support these little nuns’ religious freedom, and the religious freedom of Catholics who live and work in Tempe.

President Trump haters Kuby and Schapira are concerned about the damage to the landscape and wilderness along the border due to construction.  This is the same Lauren Kuby who showed no empathy towards residents living along Country Club Lane in Tempe when they opposed construction to install, you guessed it, more unnecessary bike lanes.  Instead of issuing a resolution in defense of the east Tempe neighborhoods, she argued with those in attendance who didn’t see it her way.  Mrs. Kuby lives in the opposite end of Tempe, but what would Optimist Park residents know about their own neighborhood?  She knows best, she says.

If Mayor Mitchell opposes the border wall, he may want to vote accordingly in the upcoming 2018 elections.  The border wall is a federal issue, not Tempe’s.  Meanwhile, why would he not support security for his residents and businesses who pay taxes to keep all of Council’s pet projects afloat?

Speaking of the business culture in Tempe, Mayor Mitchell and Tempe Council should be proud that one of their own, Fisher Industries of Tempe, was chosen as one of four companies to build a border wall prototype.  This is a huge honor and this company should be receiving accolades.  Instead, Fisher Industries is marginalized as the bad guy.  What about the jobs this company is providing, thus helping the tax base for Tempe?

Mayor Mitchell, Councilmembers Kuby and Schapira, and the rest of Council, this resolution does not speak for many people in Tempe.  It is not bold, it is not smart.  In fact, it is completely out of your realm of responsibility.  The residents of Tempe expect and deserve better than this.  They know how to change policy in Washington, and it is through federal elections, not threats like this.  If all of you truly take this declaration seriously, will you keep your doors unlocked for anyone to enter your homes?  Will you allow those who enter your homes to take your property, food, or other items because you want their votes?  Mayor Mitchell, Councilmembers Kuby and Schapira, all of you have two beautiful daughters.  What do you have to say to Kate Steinle’s father as you seek to mimic the lazy, irresponsible policies of San Francisco?  Will you walk in his shoes?