It has been long suspected that many very important Tempe City Council decisions are made behind the scenes without public input.  Of course, Council members disagree in public with this accusation.  But the way informational meetings are run and the limited question/answer sessions allowed force many to come to the conclusion the public truly isn’t welcome in the process.  Furthermore, the lackluster effort made by Council and the City in notifying the public about various committee meetings along with scheduling those meetings during work hours add fuel to the fire.

In recent months, there has been talk by the City of Tempe of going to all mail-in ballots. The excuse given is this will save the Tempe money.  When has City Council ever worried about saving its taxpayers money?  The McClintock bike lanes is one example of wasted tax money.  Anyway, there are some public input meetings around the corner to discuss the mail-in ballot proposal as well as on-line pubic comment.

At the July 27, 2017 Tempe Council meeting, a resident used his pubic comment time to ask the Council members why they had already made a decision on a building project, even though they hadn’t technically voted yet and they hadn’t done a thorough job notifying the public for input.  Of course, the Council members denied his accusations. This particular resident has spent much of his spare time following the actions of Council and also giving his own input, so this meeting was not his first rodeo with the Council.  His public comment can be seen at approximately the 49 minute  mark.

Whether Mr. Resident is correct or not on the particular issue he is referring to, around the same time one of the Tempe Council candidates for 2018 revealed the decision to go with all-mail in ballots is a done deal. 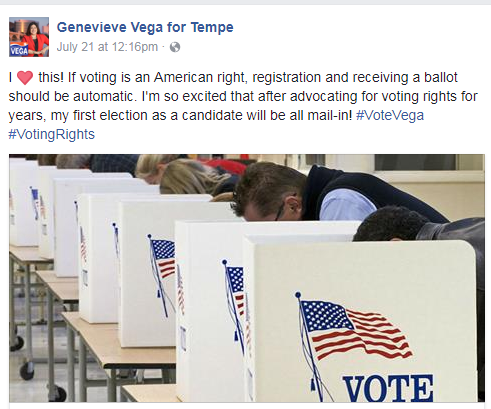 How does Candidate Vega know this?  Well, she is running with current Councilwoman Lauren Kuby.  It appears that Council will vote for all mail-in ballots, so the on-line public comment and the two meetings the city is holding to hear public opinion are nothing but a show.  The resources being used for the fake appeal for public comment is actually a waste of money, so once again we can’t believe that Tempe Council really cares about saving money.

If Mrs. Vega is already colluding with Councilwoman Kuby before either are elected, what will they be doing as Councilmembers if they are both elected next year? Will they be making deals behind the scenes to promote their own interests instead of those of Tempe residents?