Tempe’s Council Members continually campaign for their seats promoting safety and upholding our city’s communities.  Each member appears to care about the concerns of residents.  Most of them act like good neighbors.

But when there is disagreement with one of their pet projects, they will make every attempt to shut down negative comments.  Most of the decisions and changes made to Tempe are done behind closed doors or at meetings during working hours that nobody can attend.  By the time Council has “Public Comment” the deed is done.  They don’t even want to take questions from the public, in public.  Council and City of Tempe representatives divide the attendees into small groups so the city representatives can control the dialogue.  But at the end of the day, Tempe Council will tell residents and the media “We held public comment on the issue.”

This is called the Delphi Technique.  It’s worth studying before attending any public comment session at any government or school board gathering.  Tempe has the process mastered.

Council doesn’t want to dialogue with residents, but sometimes they do talk to us individually or on social media.

LAUREN KUBY–Arizona State’s sustainability representative.  When watching Council meetings, note how often Ms. Kuby refers to her employer, the ASU Sustainability Department.  Does she work on commission?  Did she run for Council to protect residents and keep Tempe fiscally sound or to promote her employer?  Some say there is a conflict of interest, but she denies it of course.

11-19-17 It’s hard when to make a point when you have to do gymnastics to avoid a certain word.  Rather than say the word “baby”, some now say “fetal personhood.”  In other words, if they refer to little humans as babies, they may feel bad about themselves for supporting Planned Parenthood.  Or the Democratic Party won’t support their candidacy. 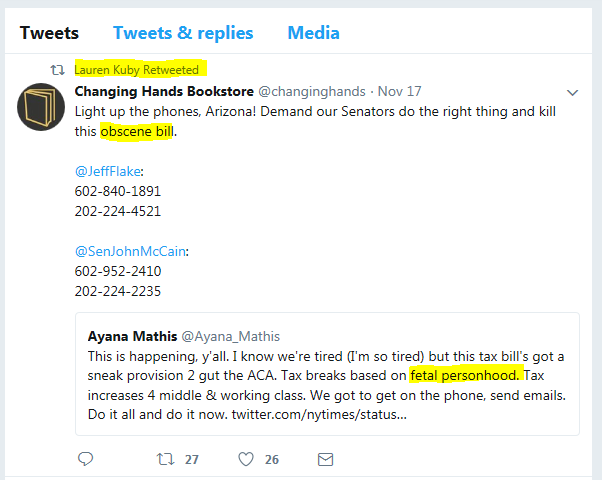 It appears one of the provisions in the fluid tax bill changes may allow parents to start saving for their child’s college education before the child is born.  Why would someone working at a university not support saving for a child’s education?  She can’t, because that would put some value on the unborn fetal personhood’s life.

7-29-17 If Councilwoman Kuby is worried about sustainability, why would she want more people living in Tempe, especially illegal immigrants?  Where in our Constitution did illegals get rights?  Kuby is definitely moving in the direction of making Tempe a Sanctuary City.  We wonder if Ms. Kuby keeps her door unlocked at night or invites illegal immigrants to dine with her after a hard day at work? 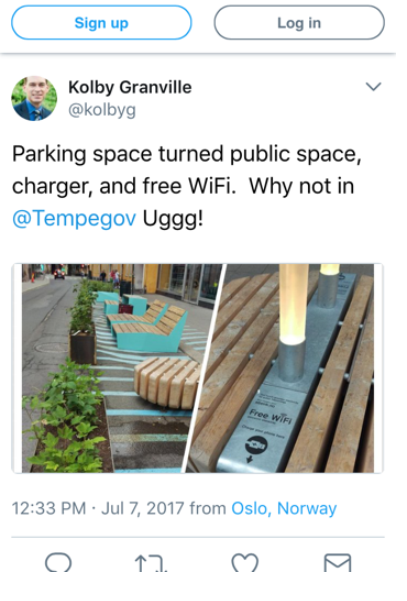 We have a few thoughts.  First, nothing is free.  What is the cost to convert some precious parking spaces to “free” wi-fi?  Second, many folks don’t need wi-fi, they can access the internet anywhere, anytime on their phone.  Third, it’s pretty hot in Tempe.  In case the Councilman forgot, while he is enjoying temperatures in the 60s in Oslo, we are suffering through another record week, with a high Friday, July 7th of 118.  Not many people will be sitting outside to grab wi-fi.  However, the existing parking spaces would be valuable so people don’t have to walk so far in the sweltering heat. 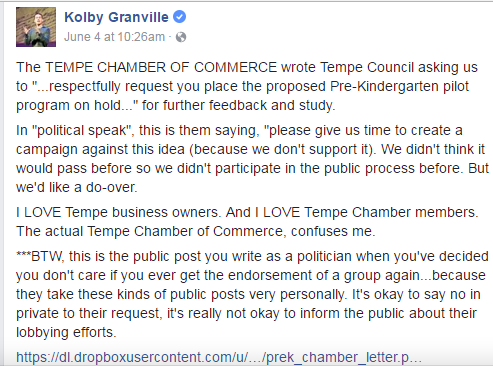 Really, Kolby Granville loves businesses?   Or does he love the tax money they provide?  He has completely messed with businesses and their employees by voting for bike lanes all over the place leading to increased difficulty accessing said businesses and customers/employees spending more time in their cars and on gas as they sit in traffic.

Tempe Council loves to tell the public they listen to business owners and care about the concerns of local entrepreneurs.  We are waiting for this to come true.  Tempe business owners and employees are working long hours, Mr. Granville, and we can’t spend our days and nights at your city meetings.  You yourself have told activist groups these meetings are held often during working hours so the public isn’t included in the process.  You were honest about that and we th you for explaining the process to us.

5-4-17 MCCLINTOCK BIKE LANES–Tempe residents woke up to candlesticks and inconsistent bike lanes markings.  How did this happen?  Why was one car lane in each direction removed for a few bikes?  Now we have more pollution from sitting in traffic, commutes take longer, and drivers confuse bike lanes with right turn lanes into businesses.  This is one of Tempe’s biggest mistakes.

Here is an email from bike enthusiast and Councilman Kolby Granville.  He is responding to a Tempe taxpayer and it is very telling about his indifference to the cost to residents.

“We will just keep at it until we get it right?”  No need for those expensive city planners, engineers, and consultants if the bike lanes are just a guessing game.  And McClintock may have been scheduled for a paint job, but we are sure Tempe paid the engineers to measure the restriping.  And were the candlesticks free?

Councilmember Granville is one of the most outspoken on Tempe Council and we appreciate his honesty.  But some things just don’t make sense.  Here is a recent response about the McClintock bike lanes:

With this line of thinking, how does Mr. Granville keep his personal spending in check? Or is losing money just okay if it is someone else’s?

6-4-17  The money must flow from the federal government down to the cities so towns like Tempe can build, mandate, regulate, change neighborhoods, and raise taxes in the process which ultimately bloats Tempe government.  Therefore, Mayor Mitchell must speak against withdrawing from the Paris Climate Accord. 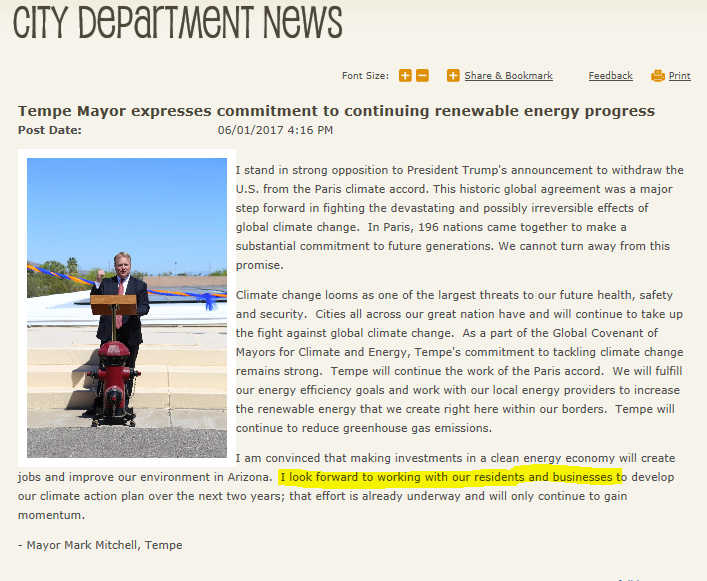 There is a big problem with the Mayor’s statement.  Tempe City Council doesn’t work with businesses and residents.  We are all waiting for that day.  And we will believe Mayor Mitchell about climate action when we see him ride his bike in the McClintock bike lanes to work everyday.

DAVID SCHAPIRA–whatever needs to be done to position himself for his next election while creating complete dependency on every level of government. 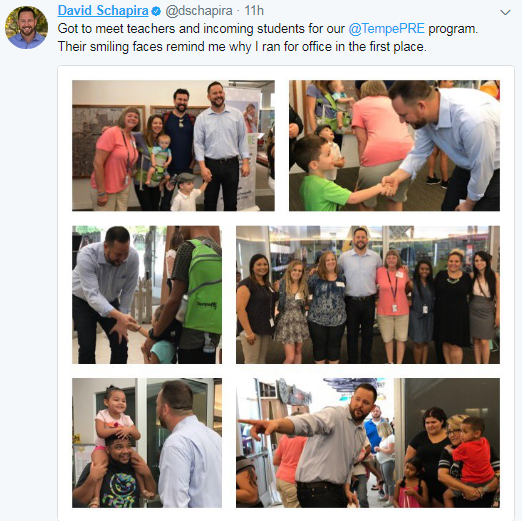 What this tweet really says is “Never mind that crime is up, look what I did! I got nursery school paid for by the Tempe taxpayers so please vote for me” Thanks, David.

6-14-17  After $6 million was budgeted so Tempe can get into the preschool business, Councilman Schapira can put another feather in his cap.  He will likely win the votes of Educrats, the Teachers’ Union, and anyone who loves to feel they are helping the children through their votes on election day.

When questioned by a Chamber of Commerce representative about the expense, Mr. Schapira went on offense.  This was the report on azcentral.com and it can also be viewed on Tempe’s government channel on May 25, 2017.

Mr. Schapira, let’s review where the taxpayers are when you and your cohorts are having your important meetings.  We are monitoring the federal government, the state government, the county government, the school boards, the city government, APS, SRP, Arizona Corporation Commission, the United Nations, raising our kids, helping with homework, going to church/synagogue, and working our you-know-whats off so we can pay our bills and taxes for you and other government officials to spend.

Don’t blame us, you and Tempe Council shoulder all the responsibility for mismanaging our taxes and overspending.